The Mayor Dimitar Nikolov has received the prestigious award of the  Bulgarian Outsourcing Association and this happened just a few days before Burgas was declared to be the best city to live in Bulgaria according to Darik Radio and its listeners. 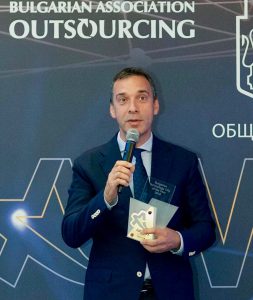 Bulgarian Outsourcing Association (BOA in Latin, BAA in Cyrillic) bestowed awards in 13 categories in its competition for outsourcing, innovations and technologies. For a fifth time, a jury of foreign professionals and leaders in the sector of informational and communication technologies awarded the best Bulgarian examples for the best technological employer, the best outsourcing companies and software development, as well as the best projects and products, etc.

The Mayor Dimitar Nikolov has received the award of the Bulgarian Outsourcing Association for a Technological City 2018, for the successful efforts of the local authority, business and academic community for the development of software talents, high technologies and attracting the companies in the city.

Small part of the exceptional efforts of the city and the citizens of Burgas during the last years are related to the creation of the new Professional Secondary School in Computer Programming and Innovations, the development of a free Summer IT Academy for schoolboys/schoolgirls and students and other educational formats, the active and successful work of ICT Cluster – Burgas for the support of IT and entrepreneurial ecosystem in the city, and many others.

In the “Innovations in technologies” category, the jury bestowed the award to the Plovdiv Company -Programista, which also won the award “IT Product for 2018” with its developed system for building a 3D model of the human body.

The award for Start-up Company for 2018, was received by Cargotec Bulgaria, which opened a global center for business services in Sofia in 2017. For Technological Employer of 2018 was announced to be Experian Bulgaria, Scale Focus also won two awards this year– for the most innovative working space for its employees, who were the people that had designed the space in which they are going to feel most comfortable in, as well as for the best Research and Development (R&D) Center.

For supplier of outsoaring services for 2018 was announced to be the BULPROS Company due to its proven ability to provide added business value to its customers, realizing its best practices and supporting the sustainable growth of the entire sector in our country.

The Shared Services Center award for 2018, working in Bulgaria, was given to Cargill. The Technological Business Building of the Year is the new modern center “Polygraphy” in Sofia. The award for “IT Project of the Year” was for Lirex, and the Software Company for 2018 is EPAM Systems.

The good news is that at least half of the companies that were awarded in the competition, successfully present in Burgas or have future plans to present in the city.

The representatives of IT and Outsourcing business declare that software sector has a growth of 12 to 18% yearly during the last 10 years and pays an average remuneration to its employers, which often is 4 times higher than the average salary for the country.

“The challenges that stand on the way of our industry are mainly positive and could be resolved by our collective efforts”, said Ivaylo Slavov, chairman of the Bulgarian Outsourcing Association and added that “in the context of the new industrial revolution, innovations and digitalization can help really quickly even to the smallest companies within the sector to get on the world stage faster than others that define themselves as leaders”.

According to him, the main challenge that most of the industrial sectors in Bulgaria have is that they should be quickly digitalized otherwise they will not be competitive and can quickly lose their business.

Ivaylo Slavov thanked the local authorities in Burgas and Varna for the huge work they have done during the last years for business development, including through establishing new schools, academies, infrastructure, etc.